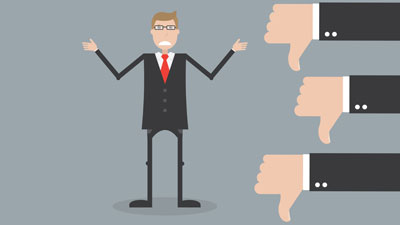 No One Likes You

Like millions of businesses around the world, at some point in time, you decided to hop on the Facebook train. You created a presence with either enthusiasm or disdain (seems everyone starts at one end of the spectrum or the other) and posted your first update.
Since then, things have been a little stagnant. The fans didn’t come pouring in the way you hoped (or expected) and as a result, your enthusiasm and activity level have waned.
Ready to fire back up? First, let’s diagnose why your Facebook fans have been a bit lackadaisical. Or worse.
You set up the wrong kind of presence: Many businesses mistakenly create an account rather than a page. An account is owned by an individual and has friends. A page is created by an account holder and has likes.
No only is it the wrong kind of presence but if Facebook realizes you’ve given a business entity a personal account, they can force you to shut it down. Which means you’d lose all your friends/fans and have to start over. Be sure you have the right set up.
You infrequently and inconsistently post: It’s a little like knowing someone who rarely speaks to you. Or speaks to you a ton for one hour and then ignores you for the next five days. Pretty soon, you find someone else to talk to.
Related Article: How to Get More Likes on Your Facebook Page
You can’t expect people to pay attention if they can’t count on you. Hopefully your plan is to use your Facebook presence to create a relationship with people who either are already fans of your work or could be. Silence is not a great relationship enhancer.
You’re all about you: This is one of the biggest marketing mistakes that most organizations consistently make. All they do is talk about themselves. This usually comes from one of two places. First, you don’t have a good idea of who you are talking to, so you aren’t sure how to talk about what they’d care about. So you default to talking about yourself.
Or, you aren’t thinking about your Facebook presence as a relationship conduit in the same way you’d think about a face-to-face conversation. If you were sitting across from someone, you wouldn’t be rude enough to blather on about yourself non-stop. Don’t do it on Facebook either.
You use Facebook as a sales tool: It’s okay to share a great deal or special pricing now and then on your Facebook page. But, it’s not a sales flier – it’s a place to connect. The Facebook pages that I spend time on are the ones that make me smarter, make my life easier/better, make me laugh, connect me to a memory or to a community of people with whom I share a common interest.
I never mind when they occasionally pitch me, because the rest of the time they give me so much value, I’m grateful. Would your Facebook fans say the same thing?
You never use Facebook as a sales tool:  I know, people are fickle. Especially if you are a retail location or sell a product, one of the reasons people are willing to like your page is because they think it will get them something special or at a discount. Don’t disappoint them. Just do it sparingly.
You tell and sell: One of the best and easiest ways to generate activity on your Facebook page (which will generate new likes) is to ask questions. By getting your fans involved, you can actually have a conversation and even better, their friends will see the interaction and hopefully decide to join in as well.
Remember that like all social media, Facebook is permission based. Your audience can disconnect from you any time they want. So provide value every day and watch your likes spike.
This article was originally published by Drew’s Marketing Minute