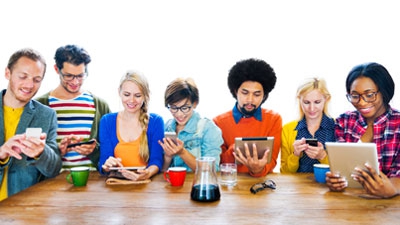 How to Get Your Social Media Lineup Just Right

The social media world is becoming more like Baskin Robbins everyday. While there aren’t 31 flavors yet, it wouldn’t surprise me if we got to that point pretty soon.
That’s fine for users, but it can be confusing for small business marketers. I remember ballpark vendors at the entry gates shouting, “You can’t tell the players without a program,” so let’s create a social media “program” and pencil in the current lineup, including some stats and each player’s strengths.
Facebook. The seasoned and savvy veteran. Commanded big money last time he was on the market. Can hit to all fields (demographics) and if you’re looking to target an older crowd, this is probably your first choice (second might be Pinterest). If you have an ad budget, increasingly sophisticated systems allow you to reach your audience. You can post all kinds of content here, so it gives you another place to post content you’ve created for your blog, Instagram, Twitter and others.
Instagram. This is the younger player who surprised many social media scouts by overtaking Twitter in number of users. The content here is visual and the audience trends young and urban. If you can post visually interesting and creative photographs, you need this one on your team. Many businesses are doing a great job with Instagram. Scout the competition and plot your strategy.
Related Article: 7 Ways Your Small Business Can Improve Its Social Media Marketing
Twitter. This is the player who gives you a great quote after every game. If you can say it in 140 characters and have an occasional image you want to share, this one is for you. Skews young with a widely dispersed audience. Good for fostering conversations with your customers and clients—keeping the channels of communication open and therefore promoting your brand.
Pinterest. Somewhat older women (25-45) make up the Pinterest fan club. If you make or sell visually interesting items, you need to be here, but be sure to bring your A-game of photographic skills with you or you’ll strike out immediately. You have the ability to generate great links to your site.
Google-plus. This is one of the most valuable utility players in the business. By establishing a solid Google-plus profile you help insure that Google is going to get the details of your business correct. You can also engage your customers and like-minded professionals. It also offers an excellent gateway to YouTube.
YouTube. When your customers go scouting for the product or service that you offer, there’s a good chance that at some point, they will be looking a videos on YouTube. You probably can’t afford to advertise on CBS during primetime, but you can post some how-to videos on YouTube that will be available to prospects 24-7.
Vine. While we’re handicapping social media video platforms, we have to mention Vine. Vine is to YouTube what Twitter is to your company’s blog. Can you produce a six-second looping video with viral potential? Vine appeals to younger social media users. Major brands have used it with some success. Barcardi Rum, for example, has a six-second lesson on making a Cuba Libre. Cheers!
Snapchat. When six-second looping videos consume too much time, there’s Snapchat. Users send photos that delete themselves 10 seconds after being opened. Because of that feature they can create a sense of “urgency.” One company devised a way to send a coupon via Snapchat. The user had to open the file in the store and use it immediately. On a baseball team, Snapchat would be the closer who is brought in to face just one hitter at the bottom of the ninth.
Tumblr. Here’s your middle-inning reliever. Typically posts here are shorter than your company’s blog, longer than Twitter and often are heavy on the images. It really skews young; almost half of its users are between 16 and 24 years old. However, there is a good deal of loyalty here, so you can build your brand if you’re willing to create great content.
LinkedIn. This is the real specialist on our social media marketing team. When your prospects are other businesses or professionals, this is the only player with the right skillset. Take great care crafting your contact and background information. Don’t think of it as just an electronic resume. Market yourself and your business.
I think I’ve hit all of today’s major social media here, but it did take me a while to write this, so there could be a new kid in the lineup by now…
This article was originally published by Susan Solovic