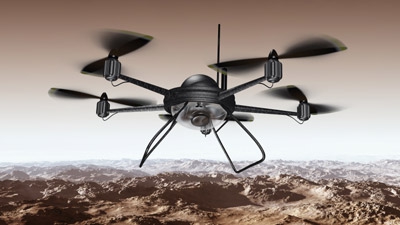 Startups on Track in Development of Drone Technology

When Amazon announced plans to potentially use drones for delivery services in the near future, the public responded with a mixture of disbelief, excitement and paranoia. However, the robotics industry had a reason to rejoice.
Suddenly, an industry that had long been primarily dominated by enormous companies contracting with the United States Department of Defense manufacturing equipment for military purposes began to look like the stuff of which exciting new startups are made.
The prospect of delivery drones cruising our civilian skies is farther from science fiction and closer to reality than many people may realize. One of the tasks for companies in this field is changing public perception.
Changing Our Perception
Currently, the word “drone” is generally accompanied by the word “strike” and is connected in the mind of many with military purposes like limited bombing campaigns or spying. Names like flying robots or unmanned aerial vehicles (UAV) are less loaded with negative connotations and equally as accurate; the technology has as much or more potential for civilian applications as it does for military.
Amazon’s announcement late in 2013 did not launch a new industry. Instead, what it did was take steps toward rehabilitating the image of technology that was already under development.
UAV’s have a number of other potential uses that include mine rescue and fighting fires. In other words, the image of the frightening military drone is poised to make an about-face to that of a technology that not only has a neutral business application that saves lives.
The industry has another hurdle to overcome, however: FAA regulations do not currently permit flying robots. A congressional mandate means that by 2015, civilian UAV’s must be integrated into airspace, but this does not mean that flying robots will be delivering packages by then.
The technology itself is roughly two to three years away from readiness, and initially, the FAA is likely to approve hovering robots as opposed to those darting about in the air. Currently, farmers are already allowed to use flying robots to survey crops on their own land, but using commercial airspace is a different matter.
3D Robotics is one example of the startups currently developing this type of technology. It is one of several UAV companies helmed by hobbyists in the field; its co-founder, Chris Anderson, was the editor of “Wired.” Like similar companies, it has raised a great deal of its funding from venture capitalists including Foundry Group and True Ventures.
Among other products, 3D Robotics has developed a UAV for use in aerial photography that costs around $500 and is working on more products for use in agriculture.
Airware, funded in part by Google Ventures and Andreessen Horowitz, markets its products for a number of innovative uses as well including prevention of rhino poaching in areas where the animals are endangered.
Matternet, a startup in Silicon Valley also funded in part by Andreessen Horowitz, will focus on UAVs in developing countries to deliver needed goods in areas where there are no roads. Other companies including CyPhyWorks cite work on infrastructure as an important function for UAVs.
The Future looks bright for Drone Startups
All of these startups will face a number of challenges including the size, expertise, and track record of companies like Boeing that have been supplying robotics technology to the military for years.
However, what they lack in size they make up for in innovation and flexibility. In fact, it was the time taken for Boeing’s development that led Airware founder Jonathan Downey to start his own company.
Given the hurdles still to be overcome before our skies are filled with flying robots delivering packages, Amazon’s announcement was regarded by some in the industry as somewhat premature but welcome nonetheless.
It was a savvy move that has people talking about the company itself, but it also represented a boon for the entire UAV industry. Companies involved in UAV development are clearly in the business of making products that serve a variety of human needs, and commonplace friendly drones are poised to soon be less science fiction than everyday fact.