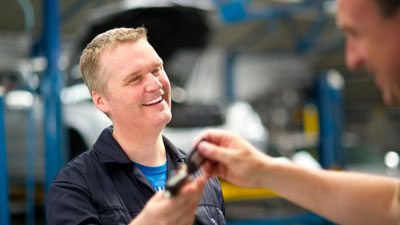 In his new book, Enhanced People Skills, John Terhune tells a great story about bringing his car to his mechanic for servicing (the warranty with his dealership had expired). The particular issue was a part that would have cost him well over $500 to repair.
After doing some research, the mechanic informed John that the part had been recalled by the manufacture and so John should take the car back to the dealership where they’d most likely replace the part at no charge. They did and John saved what would have been an unnecessary expense.
Did the mechanic lose anything?
Well, one might say he lost over $500. But, did he really? I don’t believe so. Not only would John now never even think of taking his car to anyone else; he eagerly and enthusiastically refers everyone to him. And, John is definitely one of those Centers of Influence who business owners and salespeople want as their Personal Walking Ambassador.
Related Article: Personal Referrals: Keep Them Personal
The mechanic benefited greatly from his decision to put John’s interests before his own immediate one.
Please don’t think, however, that the mechanic was being selfless (which I define as “incongruent with self”). He was not. First, he was acting congruently with his values—that being honest and placing the interests of the customer first is the right way to live life.
Secondly, he understands that it’s also the best way to conduct business. He knew his own business would be well-taken care of. Not through some magical thinking but rather for very logical reasons. When you place the other person’s interests first, they like you more and they trust you much more than they would otherwise.
Not only does that feel good…it’s very, very profitable!
Perhaps you’ve been in John’s situation, or the mechanic’s. Feel free to share stories of either.
This article was originally published by Bob Burg