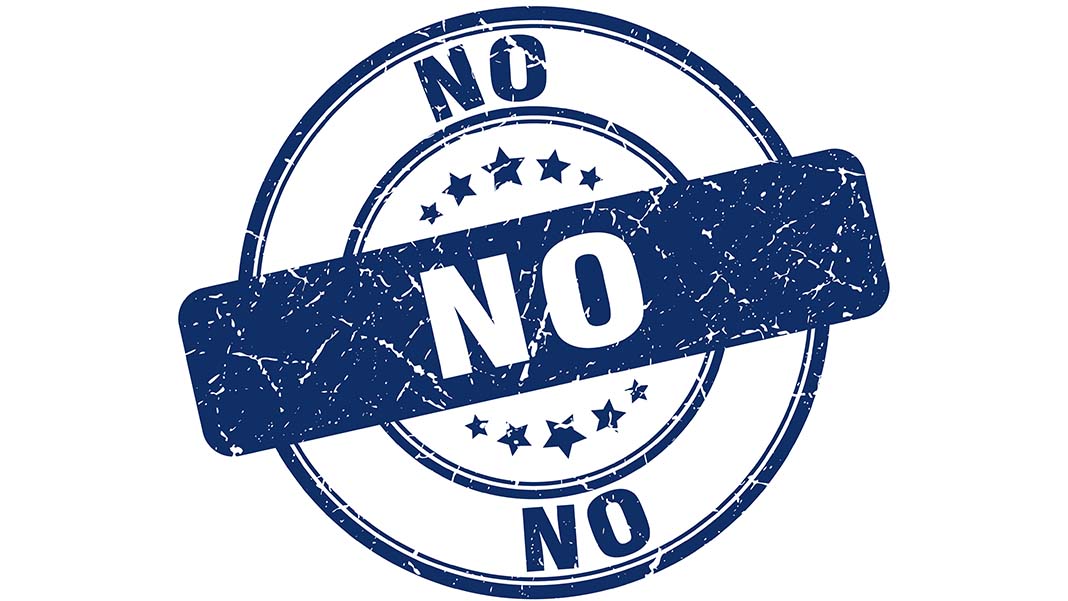 Two Letters That Disruptors Use Better Than the Rest of Us

Guess what letters disrupters use better than the rest of us.

Since the average attention span is 8 seconds, I’ll cut to the chase: the letters are “N” and “O.”

Put together, they create the most powerful word in the disrupter’s vocabulary: “NO.”

He is absolutely right.

Turns out that not only do disrupters say “no” far more often than the rest of us, but they also do it in areas most of us haven’t even considered.

They Say No To Guilt

My friend Sheryl recently posted on a social media site that she would no longer be offering marketing advice for free to friends and associates.

She made this declaration reluctantly because she is a nice person and nice people like to help their friends.

But disrupters rise above the guilt. They are unaffected by how they feel about a decision, instead relying on logic to rule the day. They have mastered what my friend Lance Witt (Replenish.net) refers to as the “higher yes.”

They have changed their paradigm from saying “no” to saying “yes” to a higher purpose, job, project, endeavor, etc., that in turn means they don’t have the time, energy or capital for other less important requests. By focusing on their highest objectives—their yeses—they avoid the guilt that often plagues the rest of us mortals.

The next time you feel a tinge of guilt, stop and focus on what you are about to say yes to. If it is a meaningless distraction, feel guilty because you are not using your time well.

But if it is noble, strategic or critical, give yourself a little love because you’ve just made a great decision.

They Say No To Busy Work

You’ve probably noticed that your successful friends seem to play a lot of golf, or travel all the time, or run, or… (add seemingly indulgent activity here). Like you, I used to judge this type of activity as folly. Then I dug deeper.

In my judgment, there is no job that is more stressful than being the president of the United States. Strike that—the White House chief of staff might be a more stressful position. So I asked Denis McDonough, former President Barack Obama’s chief of staff, how he maintained his health and sanity under such incredibly stressful conditions. His answer was simple: “I ran to and from work.” He went on to say that the run gave him space to unwind and think deeply about the challenges at hand.

Disrupters find ways to work ON their businesses exponentially more than they work IN them. This means that they are thoughtfully considering what’s next instead of working on what’s now.

To make this happen, they must become strategically selfish. They must create ways to block and protect large chunks of personal think time. So while you may perceive disrupters as messing around and having a good time, they understand that they are giving themselves space to think objectively. They are saying “no” to busy work.

They Say No To Money

This one may surprise you. It certainly surprised me.

As a younger man, I was certain that wealthy people got that way by an incessant focus on cash. Today, I am absolutely certain that most of my rich friends don’t care about money. Turns out that having money is actually a symptom of their focus on something much bigger than money, a purpose, a cause, a mission, a passion….

(Author’s note: I’ll admit to a bit of faulty research here since I don’t really care to hang out with people who are money obsessed).

In my experience, people who say yes to money are often accepting an unfortunate cycle that leaves them with a short-term surplus of cash but a long-term deficit in mojo. This is because, for most people, money does not drive them to show up and fully engage in a challenge. They do only what they have to do to get the money. But as we all eventually learn, it is only the fully engaged people who manage to consistently rise over time.

And as they rise, they create more wealth and meaning for themselves and those around them.

People who focus on money are often too afraid of taking the risks required for disruption to take root. After all, why break from a pattern that has made you so much money? If you look at any company or industry that has been disrupted, it was led by people with this common mindset.

Purpose-driven people and companies are different. They have seen that moving from purpose to promise to proof creates both fulfillment and wealth.

The lesson is as simple as it is critical. If you are not making the dent you wish you were in the universe, chances are you are saying “yes” far too often.

What are you going to say “no” to this week?