Home / Leadership / Strategic Planning / Sideways Thinking: How to Change the Direction of Your Business 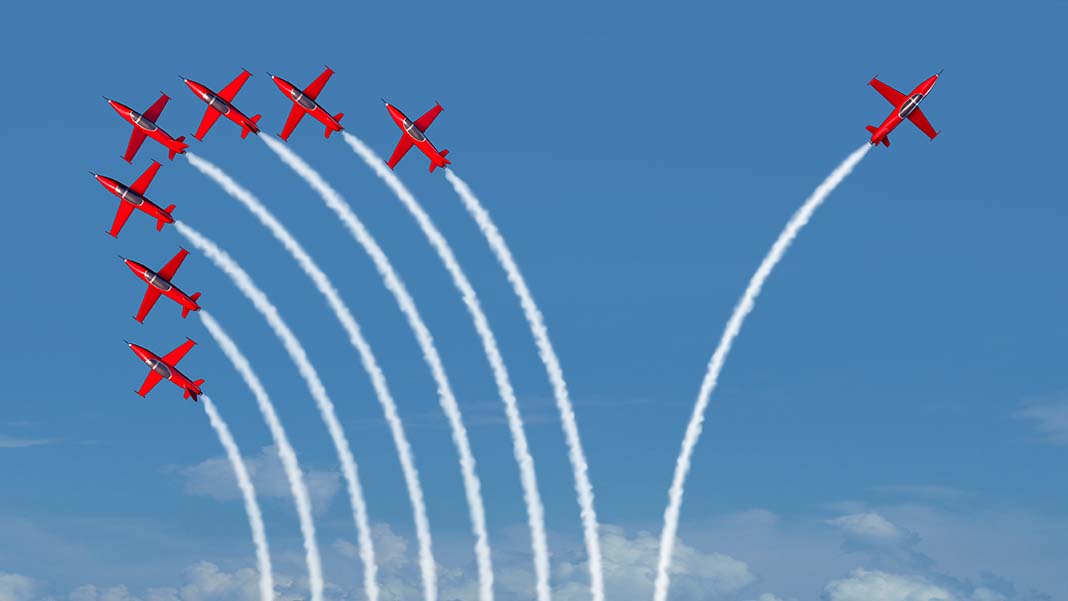 Sideways Thinking: How to Change the Direction of Your Business

There is one quality that no business owner or entrepreneur could survive without, and that’s the ability to adapt.

From Darwin to Einstein, the greatest thinkers in history have agreed that those most likely to thrive are also the most responsive to change.

Whatever environment you may have started a business in, changes in the market, consumer demand and technological advancements will need to be met with innovation and a willingness to shift direction.

Eric Ries, entrepreneur and author of ‘The Lean Start-up,’ in which he advocates continuous change as a means to successful business, describes this process as a ‘pivot.’

The emphasis in this is on positive response rather than a complete U-turn:

‘I want to introduce the concept of the pivot, the idea that successful startups change directions but stay grounded in what they’ve learned…By contrast, many unsuccessful startups simply jump outright from one vision to something completely different. These jumps are extremely risky, because they don’t leverage the validated learning about customers that came before.’

Many high profile enterprises have changed direction a number of times in order to become the successes they are today.

Take Instagram. The app was originally called Burbn (its creator Kevon Systrom was crazy about whiskey) and was, at its inception, far more complicated than it is today.

Envisioned as an app to facilitate ‘meet-ups’ between friends, its features included the ability to ‘check-in’ at chosen locations, plan future meetings, a points system for hanging out with friends as well as the facility to post pictures of the meet-ups.

The app failed to take off and after bringing on another programmer—Mike Kreiger—Systrom continued to monitor customer behavior. By focusing on analytics, the pair realized that people were not using the ‘check-in’ features at all…but the photo-sharing was an absolute hit.

The pivot here was pouring all resources into the photo-sharing infrastructure and cutting away everything else. Bought by Facebook in 2012 for a reported $1 billion in stock, the app now has 400 million users, surpassing even the mighty Twitter’s reach.

Even hugely successful enterprises such as Ebay have readjusted their direction.

Having enjoyed meteoric success as an online auction marketplace, when John Donahoe took over as CEO in 2008 he saw an opportunity for growth in moving towards fixed sales prices.

Despite experiencing a huge backlash from sellers after making dramatic changes to listing fees and the site’s feedback system, Donahoe’s vision paid off.

The company is now predominantly an e-commerce operation with over 70% of items sold at a fixed price rather than by auction. Over the seven years that Donahoe was at the helm, Ebay’s share value rose by over 400%.

Speaking to the BBC in 2014 he claims he is glad he stood firm:

‘There is always a new normal because the pace of technology innovation is changing and consumer behavior is changing. So our leaders have to be comfortable that their job is to continuously drive change.’

It’s not only modern multinationals that have achieved success through a new focus.

Many brands that seem to have been around forever were once entirely different incarnations:

So, it’s pretty clear that the lessons learned when starting any business will be the fuel for any diverted journey.

But how do you change direction safely? The following guidelines should steer your path:

Be sure you are doing this for the right reasons

You need to be certain that a course change is really what your business needs right now.

The first thing to look at is growth. If your business is not growing in comparison to its competitors there will be reasons. Most likely you will not have been keeping up to date with changes in market trends.

Look at what the innovative young start-ups in your sector are doing and why. Are there niches forming that could be tapped into with a shift in focus?

Make sure you analyze your own customer behavior; check your feedback on social media and try to ascertain if your product is still proving relevant to them. Your sales team should be able to give you some insights into what your client base is asking for that you may not be providing.

If you have been relatively successful in the past, you can draw on what you have learned and apply it to a new direction.

The key is knowing if your business will flounder or flourish if taken off course.

Your existing business will have a certain functionality that will have taken years of honing. If you are changing direction, you will need to take the best parts of these business practices and blend them with new skills and resources.

You must be sure that you can manage the associated costs; there will likely be new technology to invest in as well as new staff with the skills to take the business in its new direction, not to mention the extra time you will need to dedicate to the implementation of these changes.

And you need to do all of this while keeping your existing customer base on board and reaching out to the new clients your change is directed at.

Of course, your existing team will have to be brought around to the new direction and those that are resistant, or perhaps superfluous, may well have to move on.

Before embarking on your new journey, you will need a detailed plan that will underpin the feasibility of the project based on your current resources and cash-flow, as well as affordable investments and careful long and short term market analysis.

Take it slowly, but surely

One thing you and your team will have to accept is that change takes time.

A new direction is looking to long-term rewards and so the bumps and scrapes along the way with have to be weathered with resilience.

After you have introduced your plan—including restructuring, new systems and strategies—it’s important that all are aware that the learning curve will take a while to navigate and that progress won’t happen overnight.

And good communication will be vital. Keeping everyone in the loop, from leading team members to the newest recruits, customers, suppliers and funders, will smooth the ride.

Always remember to ask your colleagues for their insights as the journey progresses; you will be stronger together.

Ultimately, as the instigator of this new direction, your role will be to motivate your team and reassure them that this is the right move for the business.

Whatever business you are in, remaining open to change will be key to your long-term survival. Deciding that the opportunity is no longer where you first thought it to be is not an admission of defeat but a cue to ‘pivot’—and spin your business into greater success!

Author: Nicky Tatley, Senior Writer at BusinessesForSale.com, the market-leading directory of business opportunities from Dynamis. Nicky writes for titles across the Dynamis stable, as well as a number of other industry publications, both print and online.