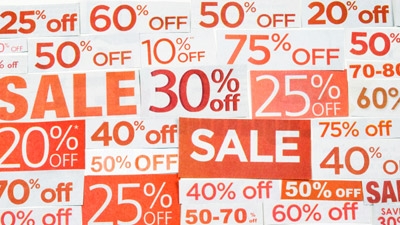 If the Customer Doesn’t Want to Buy, Discounts Won’t Help

We’ve been working with a customer, diligently talking about their problems and concerns, educating them about our solution, and trying to move them through our sales process.
They’ve been interested, somewhat. They’ve met with us, asked us the right questions, perhaps given some buying signals—but things drag, the deal becomes stuck. The customer isn’t saying no, but they aren’t moving forward. It’s just hanging there—we want to get them to buy!
So we play the discount card. Too many sales people think resistance is about money, so, unilaterally, they offer the discount to break the deal free. “Buy now and we will give you 20% off,” or, “We have a special promotion if you buy now,” or…
Even “free” doesn’t help if the customer doesn’t want to buy (people basing their customer acquisition based solely on “freemiums,” listen up). If the customer doesn’t have a need to buy, they won’t buy even if you give it away. If their problem isn’t urgent enough to change, a discount won’t make them change.
It’s a major sales error to use pricing actions to break a stalled deal lose. Pricing actions are meaningless until the customer decides, “I want to buy.” Pricing actions are meaningless until pricing is the only issue keeping a customer from buying.
As much as I abhor discounting, discounting discussions should never happen until the customer says, “I want to buy, but your price is too high.” Until the customer says this, any form of pricing action or discounting is a distraction. It’s absolutely meaningless.
If deals become stalled, we have to understand why they are stalled and overcome those issues. If there is no urgency, we need to create the urgency. As Brent Adamson says, “We need to make the pain of not changing greater than the pain of change.” We have to find a way to get the problems we are solving to the top of their priorities. We need to get them to say, “I have to address this now!”
Using discounting as a way to create urgency simply doesn’t work, until the customer decides to buy. If we use the discounting card too early, when the customer does decide to buy, guess where the discounting discussion start—it starts at the previously offered discount and only goes down from there.
Sure organizations use discounting and promotions to drive demand—but it only works with people who have already decided to buy. It may move their purchase in, but they already were going to buy; the promotion just impacts the timing.
Discounting is bad, period! But it is never a strategy to get a customer who has no need to buy to buy. Stop wasting your time and theirs by thinking it does.
This article was originally published by Partners in Excellence