Home / Ask SmallBizClub / Technology / What is the best way to implement electronic signatures? 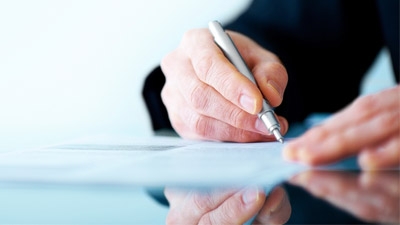 What is the best way to implement electronic signatures?

Answer: Under federal and state law, electronic contracts and electronic signatures are just as legal and enforceable as traditional paper contracts signed in ink; however, most companies are still entering into most of their agreements on paper. The norm for most businesses is to print, sign, scan, and email contracts. In large or important agreements, companies typically also exchange multiple sets of originals, so that each side as well as their legal counsel has original copies. For discussion with your lawyer, you can review discussions on the legal and other considerations with electronically signed contracts and the various electronic signature methods at websites like the following, the first of which explains:
“Numerous laws in the United States and abroad recognize the legitimacy of electronic signatures. The federal ESIGN Act and Uniform Electronic Transactions Act (UETA) serve to establish generally the legal equivalence of electronic records and signatures with paper writings and manually-signed signatures, removing barriers to electronic commerce. Forty-seven states have adopted the UETA, a model law for states to enact to cover contracts governed by state law; the remaining states, New York, Illinois, and
Washington, have each adopted their own statutes governing electronic transactions. Under the UETA, an electronic signature is attributable to a person if it was the act of the person, which can be shown by the effectiveness of the security procedures for signature authentication and the context and surrounding circumstances at the time of the document’s creation. No one can be required to use a digital signature or to accept a digital signature. Besides the United States, the European Union has adopted the Electronic Signature Directive (1999/93/EC) and numerous countries have adopted electronic signature laws.”
As to the legality and admissibility of an electronic signature in a court of law, the following article states:
““Legal effect” pretty much means that, yes, the court will accept that an “electronic signature” is a “signature” as already defined by precedent and law. So, in other words, an electronic signature and a wet ink signature are equivalent in most respects, and they can be brought into trial. However, just like their wet ink counterparts, each document intended to be entered into evidence in a trial will need to be assessed for its “admissibility,” whether it’s signed with ink or a digital certificate. Does it represent the intent of the signatory? Has the document been altered? Who had the right to sign this document? How was the signature derived, and what controlled access to the document for its signature? These questions come into play no matter the type of signature.
However, wet ink signatures have been in use for quite a long time and have established a certain amount of credibility. Electronic signatures, on the other hand, are a newer phenomenon, and thus may be more subject to the critical eye of the court. This is where the concept of assurance, as described in the previous entry in this series, can come into play. Higher assurance signature methods that authenticate the signer, use document fingerprinting (‘hashing’) to provide integrity, and store signature keys (and thus, the “pen”) in a secure manner, are more likely in the long run to be provided with the benefit of the doubt than those signature technologies which provide lesser assurance. So, in the end, your electronic signature may be a legal signature, but it could be tossed out of court if the judge feels that the signature process did not provide the appropriate level of assurance.”
We do not know the details of your sales and contracting process or volume which may impact the electronic signature method you select, but using an electronic signature software service for contracts, like those offered by Adobe, DocuSign, Arx, or AlphaTrust for example, may be an option. You can research these and other e-signature vendors’ service offerings at the following websites:

As COO of Tarkenton Companies for more than 20 years, Rick has been responsible for business software development, unique partnerships, business educational content and consulting, and more. Rick was the originator of Tarkenton Companies’s consulting service and initially handled all of the questions himself. Prior to joining Tarkenton Companies, Rick owned and operated a private practice as a CPA. Prior to that, he was a Senior Manager at Pannell Kerr Forster in tax and audit, as well as Principal in Ernst & Young's small business advisory group.