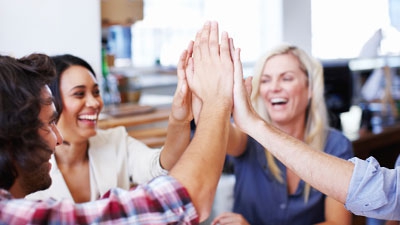 I’ve never quite agreed with the saying, “there is no ‘I’ in ‘team.'” Well, I agree with it literally since, indeed there is no letter “i” in that word. I also agree and feel very strongly that the individual needs to put the interests of the team before their own.
The way the saying is often intended, however, is where I take issue. Its meaning is that there are no individuals within a team. In my opinion, a team is nothing more than a group of individuals who’ve come together in order to achieve a common goal.
If these individuals are wise, they understand that only by putting the good of the team ahead of their own interests will the team win. This is of the greatest benefit to them as individuals. This holds true for everything from sports to family to business.
Related Article: Building a Team through Shared Goals
Vince Lombardi himself, the famed NFL multi-Super Bowl Champion Coach said:
“Individual commitment to a group effort—that is what makes a team work, a company work, a society work, a civilization work.”
The very first word in the above quote is about the individual.
All too often, when brought in to speak at sales and leadership conferences, the client will tell me that one of their biggest challenges is the silos that have formed, causing separation, both of spirit and communication. Those in one department believe theirs is the lynchpin of the company and that without them, the company could not possibly succeed.
And, they are correct!
Of course, the same can be said about pretty much every other department.
This attitude results in a lack of trust, a dearth of communication, and a company bottom line that is not nearly as healthy as it could be. When that happens, jobs tend to go and the salaries are not nearly as robust.
In other words, putting one’s own (in this case, department’s) interests ahead of the entire team’s—or company’s—is also detrimental to the interests of the individual.
Sports? Family? Business?
They all involve individuals as well as others. And, to the degree we put the good of the team ahead of ourselves, that’s the degree we all thrive.
So, want to be part of a winning team? Then be a team player. Put the good of the team ahead of yourself
But, there’s no need to lose your individuality in the process.
This article was originally published by Bob Burg