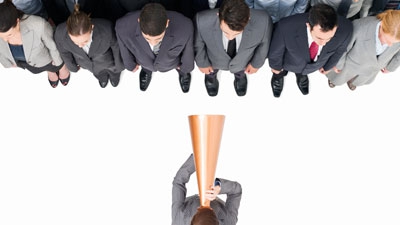 Is Your Leadership Style Alienating Your Team?

Your toughness, single-mindedness and take-no-prisoners attitude helped you become a successful entrepreneur. But now, just as it should all be coming together, something is not right.
In meetings, your staff claims everything is on track, yet you keep getting blindsided by crises. Why didn’t your staff come to you before the problems escalated? When you talk with employees, they avoid eye contact and skitter away as soon as possible. When you ask a question, no one wants to answer. You may yell and threaten occasionally (all right, frequently), but feel that’s what it takes to get people to act.
You’re frustrated because nobody gets your vision or works as intensely as you do. It doesn’t help that people on staff keep quitting. You’d think that by now the hiring managers would know how to hire the right people. Sure, you may be a demanding boss, but isn’t that required in today’s tough and competitive market?
Maybe. But maybe not.
Understanding the Issue
As author and coach Devin C. Hughes recently shared with me in an interview on office bullying, most bully-bosses don’t recognize how their behavior has labeled them. But when you create an intimidating, disrespectful and degrading atmosphere in the office, the reality is yes—you are a bully.
Related Article: Banish the Workplace Bully
In the workplace, a bully looks different from the pubescent version who steals kids’ lunch money. Take Devin’s example of Ted. A successful entrepreneur, he’s been a go-getter all of his life. He knows how to achieve goals, whether it is envisioning and creating a brilliant startup or inspiring a group of investors to get involved. He’s always had a huge ego, but his accomplishments made it easy to excuse his behavior as, “Ted just being Ted.”
But now that the business has grown and more people are on board, Ted’s leadership is truly problematic. He doesn’t listen to his staff when they want to share ideas. Instead, he belittles them. He may yell or berate them if they make a mistake, or he may be more subtle, using sarcasm, condescension or exclusion to get his disapproval across. In any case, it is effective in the moment. However, employees no longer try to share ideas, concerns or problems with him and eventually, valuable employees either shut down or quit.
Breaking Down Office Bullies
This is not an extreme case. According to the Workplace Bullying Institute, 72 percent of bullies are bosses. That tough, uncompromising, bulldozer approach that garnered initial success doesn’t work as the business grows and requires higher-level management skills like building teams, infusing passion and creating collaboration. In fact, that bullying atmosphere won’t just keep a company from growing—it can lead to its downfall.
Bullying causes increased physical and emotional stress on employees. This leads to illness, absenteeism, decreased productivity and employee turnover. It affects employee morale and your overall culture. “Chances are,” says Devin, “if you show that bullying behavior is acceptable, other people are probably doing it in other areas of the organization. That means you have a culture where the people who should be the cornerstones of your organization are afraid to come to you. Instead of taking the chance that you’ll berate them about a problem, they’ll attempt to handle it themselves, only coming to you when it is clearly out of hand. Instead of coming to you with innovative ideas, they will quit and go to the competition. Still others will stay and be minimally productive since they are not invested in the vision at all.”
Looking at the Man (or Woman) in the Mirror
Whether you’re a full-fledged bully or just an occasional pain, it doesn’t hurt to take Devin’s advice and look at how your behavior is affecting your workplace.
Bullying, even occasionally, is a deep-seated habit. But it can be unlearned, usually through therapy and behavior modification. Recognizing that you may be a bully is the first step.
This article was originally published by Startup Collective
Author: Corey Blake is a creative producer, storyteller, and community manager. He founded Round Table Companies (RTC) in 2006 and now employs a staff of 32 creatives who assist him in actualizing the story based marketing campaigns and legacy campaigns he produces and directs for clients. Corey’s work in commercials has been seen by hundreds of millions of viewers, he has produced 14 award-winning books, and his work has been covered by the New York Times, Boston Globe, WSJ, Forbes, Inc., and on NPR, CNN, and Bloomberg Television. He contributes to Forbes and Huffington Post. www.coreyblakecreative.com  Follow him @CoreyBlake9000.