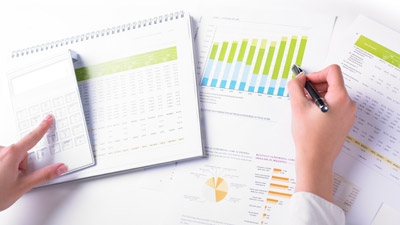 Risk comes from not knowing what you’re doing.
~Warren Buffett
One problem I see all the time is businesses financing their short-term assets improperly, which greatly increases the risk to the firm and can potentially even cause it to fail. This is a serious issue, but it can be remedied by choosing an alternative financing method.
I was working with a large petroleum distribution company that moved a great deal of gasoline and diesel products. They paid their suppliers when they picked up the fuel but did not receive payment until after it was delivered to their customers.
The firm was financing the fuel inventory and the associated accounts receivable with short-term debt. Their short-term debt was about $2.5 million at the end of the year, and their current assets (inventory plus accounts receivable) varied from $2.5 to $3 million.
There is no way the firm could have paid off their short-term debt every year, which meant they had to refinance annually. Having to refinance every year put them at extreme risk because it left them at the mercy of the bank, which could at any time, have decided not to renew the loan or line of credit. I have seen this happen many times. The firm is doing well, then the bank changes hands or has a new loan officer, and the loan is not renewed.
A second problem with this arrangement is that the business is financing permanent current assets. Permanent current assets consist of the accounts receivable and inventory that are turned over and remain consistently high.
Generally, a firm’s accounts receivable goes down when the customer pays their bill, but in the case of the petroleum distributor, their accounts receivable just does not go down. This is because when customers pay their accounts, they just need more fuel. Last year, the firm’s accounts receivable and inventory never dropped below $2.5 million, and in the last three years, it occasionally even hit the $3 million maximum.
Normally, the right way to finance assets is to match the maturity of the asset with the maturity of the debt. For example, if I am buying a new truck, I would finance the truck for the length of its useful life of 5 to 7 years. If I had gone out and financed the same truck for one year, however, I would have put significant pressure on my finances to pay the truck off quickly.
Obviously, short-term debt is much riskier than long-term debt because you have less time to pay it back. When we finance permanent current assets with short-term debt, we put significant and unnecessary financial pressure on our business.
It makes much more sense to finance permanent current assets with intermediate or long-term debt. This is not something bankers want to do as it increases the risk of the business not being able to pay its debt, so you will need to keep on looking until you find a bank that is willing to make this type of loan.
In the case of the petroleum distributor, accounts receivable and inventory are very liquid (Sorry. I could not resist the pun!). If your firm’s inventory is not as marketable, you can find longer-term financing for accounts receivable.
Now go out and see how much of your current assets are actually permanent current assets. It is a good idea to get longer-term financing for these permanent current assets.
You can do this!