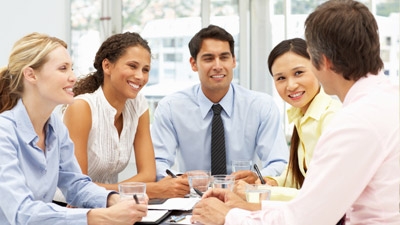 Characteristics of an Effective Team

In 2003, Slash, Duff McKagen, and Matt Sorum of Guns N’ Roses; Dave Kushner of Danzig; and Scott Weiland of Stone Temple Pilots formed the hard rock supergroup Velvet Revolver. With such talent, fan expectations were very high. The band’s debut album, “Contraband,” did well enough commercially, selling four million copies. Yet, hardcore Guns N’ Roses, Danzig and Stone Temple Pilots fans were left feeling high and dry. Something was amiss, they said, some indescribable quality common to all great bands: Velvet Revolver had no chemistry.
Whether it’s a band, a sports franchise or a company, chemistry is what makes teams great. Much of modern business thinking is centered on understanding what makes great teams tick. More often than not, effective teams share the following five characteristics.
Team members communicate freely
By the time Velvet Revolver went on a hiatus in 2008, communication between band members had broken down completely; four of the band members were not on speaking terms with lead singer Scott Weiland. Crucial information was often relayed through the media rather than through actual conversations between the members. It was not terribly surprising that Velvet Revolver hasn’t released a single album since 2007’s poorly received album, “Libertad.”
Communication is the cousin of chemistry. In any team, communication is crucial to building a sense of camaraderie between members. The content of the communication is rather irrelevant, as researchers at MIT’s Human Dynamics Laboratory have shown. Rather, the manner of communication—how freely and frequently team members communicate—determines the effectiveness of the team. Put simply, the more freely you talk to your fellow team members, the more comfortable you are in sharing insights and ideas. This is just one major reason why modern businesses emphasize communication and spend millions of dollars each year on social communication and collaboration tools.
Team members share a common goal
Imagine you are professional soccer player. You spot an opening that might give you a 25 percent chance of scoring a goal. But before you make your move, you spot another opportunity—a fellow teammate has wedged himself into a great position with a sure chance at goal. Now you have two options: (A) take the 25 percent scoring chance (and the individual glory); or (B) pass the ball onto your well-positioned teammate (and fulfill the team’s common goal).
In a well-performing team, members always take option B. A chief characteristic of any successful team is that members place the common goal above individual interests. While scaling individual targets is great for personal morale, teams succeed when they understand, appreciate, and work with a common purpose.
Divergent opinions are encouraged
While agreeing on a common goal is essential, it shouldn’t come at the cost of suppressing alternative ideas and opinions. Having divergent opinions within a team enhances team performance; a diverse team is its competitive advantage.
Diverse opinions stir creativity. Unless the status quo is threatened and questioned, you won’t find those crucial “out of the box” ideas.
Effective teams emphasize collaboration
Consider the largest technology company in the world: Apple. Apple stock might be reeling today, but Wall Street remains bullish on the company’s prospects. Perhaps biggest reason for The Street’s optimism is that two of Jobs’ closest collaborators—Timothy Cook and Jonathan Ive—still hold the reins to the company.
As much as CEO Steve Jobs was the public face of the company, Tim Cook and Jony Ive were the men behind the scenes of Apple’s success. Cook, the former COO, and Ive, the SVP of design, met with Jobs every day to discuss ideas and insights on products and profit margins. The Jobs-Ive-Cook team was exceptionally close and exceptionally effective. Cook streamlined the operational side of the business, while Ive and Jobs debated product design for hours on end. The Apple products consumers love today were born out of this very close collaboration.
Close collaboration is a trait shared by every successful team, whether it be Jobs-Cook-Ive or Lennon-McCartney or Jordan-Pippen. The idea is simple enough: the more you collaborate, the more you communicate, and the more you communicate, the more you create.
There is implicit trust between team members
Team members who cannot trust one other or who don’t believe in the process and goals of the team seldom find success. Effective teams focus on solving problems, not dealing with internal competition, jealousy and other interpersonal issues. In a way, trust is an adjunct of effective communication; there can be trust between team members only if they are allowed to air their views freely. This is the reason why organizations often undertake team-building exercises that put team members in a position of trust (hence the popularity of team-based sports among enterprises).
Across industries, building an effective team is a process, not a destination. A great team is like an organic being, continually growing and changing to adapt as situations and challenges arise.
What has helped you build effective teams, whether it’s in business, sports, or anything in between?
This article was originally published by MBA@UNC

Joshua John is the digital strategist for MBA@UNC, the online executive MBA program from the University of North Carolina-Chapel Hill. Joshua is an avid blogger and his passion lies at the intersection of business and digital media.