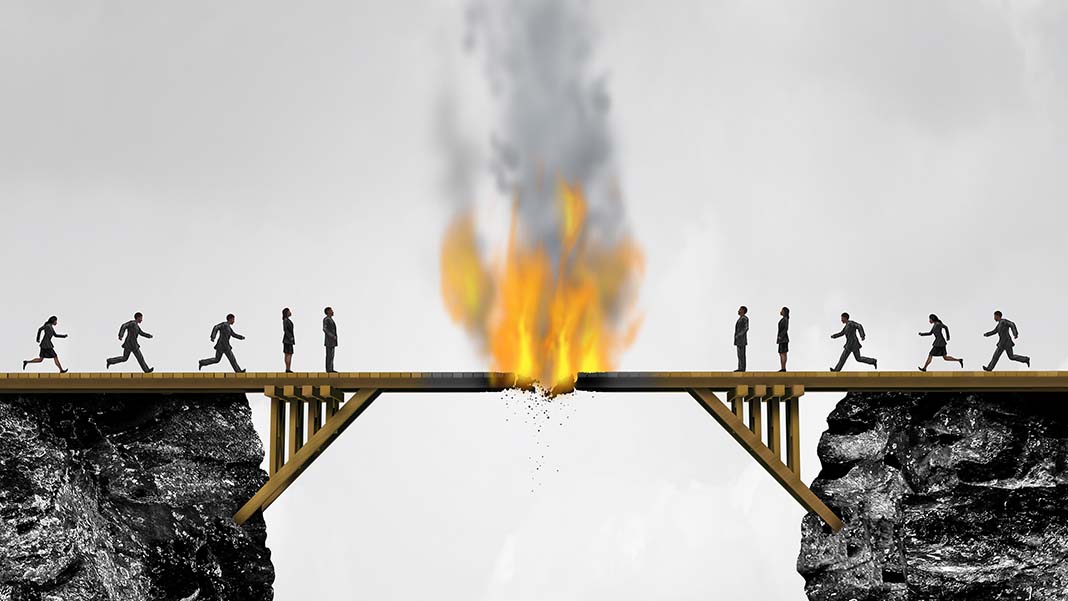 If you’re like me, you’ve heard this saying fairly consistently while growing up, through your first jobs, University, and into the business world:

I mean… it does make sense. You never want to put yourself in a position where you’ve tarnished a connection, destroyed a professional relationship, or burned a co-worker in any process (figuratively, and both literally). At the end of the day, the business world is all intertwined. One bad experience can follow you from career to career, office to office, and position to position.

With that being said, there are some cases where burning a bridge might be the only option, and the best option for you. In this article, we’re going to walk you through the few situations where it’s okay to burn a bridge, and we’ll tell you the most professional ways to do it.

Let’s start with the basics. When is it actually okay to burn a bridge?

Disagreeing with morals or company ethics

We’ve all been in positions where we’re lead by not so wonderful managers or CEO’s. We get hired on a notion of an incredible gig, good pay, different and interesting work, and it all seems fine and dandy. Once you’re into your first few weeks, you probably start to see things you aren’t too keen on. This is usually how the pattern starts.

The biggest red flag in these situations is if you find yourself disagreeing with company decisions or ethics. In my professional opinion, the minute you begin clashing with a manager’s decision or moral values, you should be writing your resignation letter.

Working for a company in which you disagree with the overall framework, and against how you would do business is only damaging to yourself and your career growth.

In these situations, it would be acceptable to put in your resignation and explain that your moral values and ethics don’t line up with the company. Sure, they might be upset you’re leaving… and yeah, they might be mad at the manner you’re leaving. But at the end of the day, you shouldn’t be working for a company in which your values don’t align. It’s not good for your personal growth, or the advancement of your employer’s company.

It’s important to do this politely, and with the utmost respect. The ‘bridge’ may be tarnished—but if it’s not a fit… then it’s not a fit. Simple as that.

I was in a position a few years ago where I was working for a company that didn’t match with my financial needs. It was a great job where I learned the framework for the business woman I am today—but at the end of the day, it wasn’t paying the bills.

I kept getting stuck in situations where things felt really tight, even when I was mindful of my spending. Before making any rash decisions, I weighed the pros and cons. Would things improve in the next few years? Could I move up in the company and eventually be doing what I wanted, AND make a better salary?

After taking some time to weigh my options, I decided that finding a new job with a higher salary was my best bet. Sure, it wasn’t the only reason for leaving the company… but it was for sure a big factor.

The point it, sometimes you decide to leave a job because you financially need to. Doesn’t mean you have to necessarily burn a bridge along the way, but it does mean you’ll be leaving for reasons that are outside your control. Doesn’t mean you can never return, it just means that for the time being, this isn’t a place you can afford to work at. The bridge isn’t necessarily burned, but it isn’t something you can go back to until the pay increases.

Peter Harris wrote that “The expression to ‘burn bridges’ comes from a military idiom. It means that as an army advances it would burn the bridges behind it to make any chance of retreat impossible. Advancing, further conquest is the only option.”

Sometimes you need to leave a job to learn a new skill or progress your career forward. The hard truth is, I won’t have a lifelong career with a company like my parents did. My parents were both High School teachers and taught for 30+ years each. Since I’m in the tech industry, I’ll probably bounce from place to place, spending a few years in each location learning new tasks and skills.

This isn’t a bad thing… by any means. But it does mean that you might have to leave a place of work after a few years so you can begin learning and developing a new skill set. Some positions can only take you so far in your career. The tough reality is that you might even have to leave a job you really love. Doesn’t mean you can never return, and it doesn’t mean you have to burn a bridge in the process. But for the time being, you’ll need to move on with another position or career to learn more skills to enhance your career.

The point is, sometimes you’ll need to leave a job for reasons you didn’t expect. Although we recommend leaving places on good terms, and never burning a bridge fully… sometimes it’s hard to avoid.

At the end of the day, try and make choices for yourself. I always try and remind people that it’s just a job. You’ll have a handful… if not… DOZENS of jobs throughout your life. They won’t all be great, and some will be the most amazing experiences and shape you into the professional you are today. But it’s just a job. You’ll always find another.

Use your best discretion when looking for new work, leaving a position and try and be as professional as possible. Remember that the reasons you leave a job are reasons that are important to you. At the end of the day… that’s all that matters.

Elysse Bujold started her career at Disney Interactive Studios, where she grew on a project team advancing initiatives for the company. To further her professional growth and development, she then decided to join StreetText – an online platform for Real Estate agents to Generate Leads using Facebook Ad Marketing. Over the last year, Elysse has been driving marketing strategies and initiatives as well as content creating. StreetText is rooted in Kelowna, British Columbia.