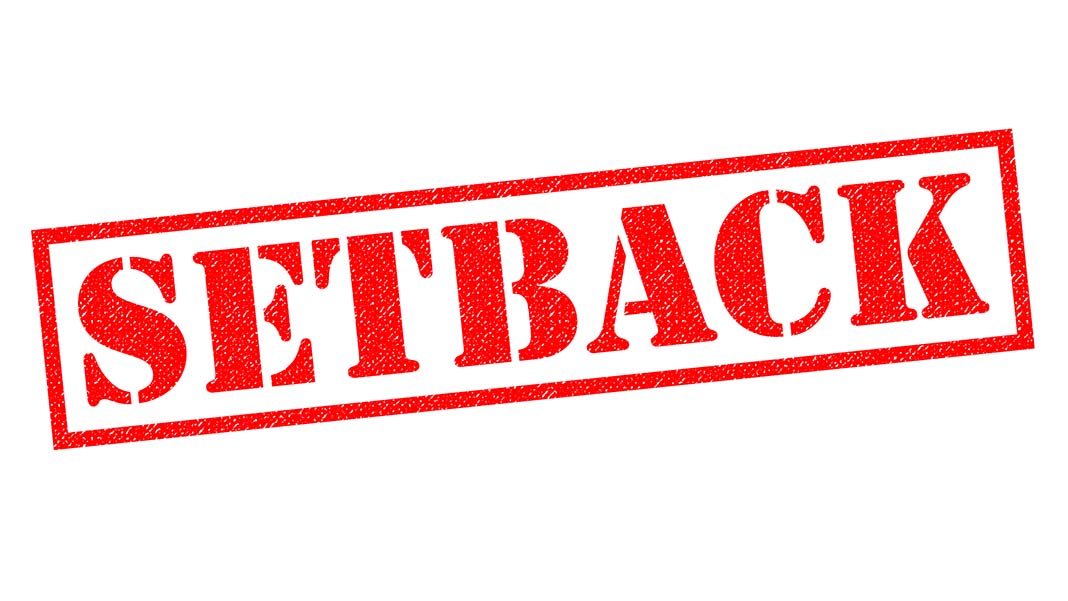 The Importance of Setbacks

Too often, we get caught up in the rush of everyday life. The press of everyday activity, the constant intrusion and interruptions drive what we do.

These become standard, we go on autopilot—even as a coping mechanism. Most important we stop paying attention, we stop being present.

This doesn’t mean we aren’t accomplishing things. The most successful tend to build routines based on what works, and we repeat them over and over, until we become un-conscious (read not present) in our execution.

It’s at these points be become most vulnerable, but we may be unconscious to the signals.

For a period, that works—simply because of the math. But ultimately it breaks down.

What used to work, no longer does.

We start experiencing setbacks. Whether it’s outright failure, or the feeling we are working far too hard for what we are getting, or that vague discomforting feeling that something isn’t right—but we just can’t put our fingers on it. Often, it’s what was fun/enjoyable becomes a hassle or no longer enjoyable.

Sometimes setbacks are the result of things outside what we are doing. Things change, someone or something has disrupted things—new/non traditional competition, business model changes, market shifts, changes in the economy, a butterfly landing on a leaf in a Brazilian jungle (talk about an obscure reference—ask me if you don’t understand.).

It’s human nature to hate setbacks because…….. well, they are setbacks.

Too often, we ignore them. We think it’s a one time occurrence, “This too will pass…..”

Often, when I get called into situations, it’s the result of a continual stream of setbacks. Things that were ignored, and ignored, until there is a consistent appearance of setbacks that can no longer be ignored.

What had been viewed as setbacks, have accumulated to become crises.

Recently, in a conversation with an executive, we discovered the same pattern. The company wasn’t failing, but it was struggling. Results were OK, far below expectations, but OK. But one could easily see they were going in the wrong direction.

We went through the usual conversation:

It looks like it is getting worse……..Yes it does……

Why do you think these are happening…… I don’t know, we haven’t been paying attention, perhaps we’ve been hiding….. (a great moment of honesty)

Have you tried to do anything about them……Increasing the pressure, increasing the activities, churning through people….

But you’re doing the same things you always have, more intensely………Now that I think about it, Yes……

Will that solve your problem……… Clearly it isn’t…. (another moment of honesty).

What have you learned from these setbacks…….. We haven’t taken the time to learn and understand them…. (and yet another moment of honesty).

What do you want to do about this…….. I don’t know, clearly we have to do something different, but I don’t know what to do…….

Setbacks are important, if we pay attention to them. They provide clues that things aren’t working—either because of things that we are or aren’t doing, of changes outside our control but which impact us.

Setbacks happen to each of us—we miss opportunities, we aren’t performing at the same level we have. Inevitably management gets on our backs. Too often we ignore them we don’t analyze them, we don’t try to understand and learn. Sometimes we avoid them—we get a new job with another company, continuing to do the same things until the setbacks mount up again.

We do the same things organizationally, sometimes churning through executives, management, people—wasting time, resources, opportunity because we are oblivious or in avoidance.

Setbacks, while often unpleasant, are a blessing. They are wake up calls, they tell us something is happening and should incent us to consider doing something different.

Setbacks happen to all of us—perhaps if we don’t encounter setbacks we aren’t trying hard enough, but regardless of our effort levels, they will always happen because many are the result of other things.

Responding to setbacks force us to learn, question, discover, experiment, and improve. Responding forces us to think about change.

Setbacks are a great opportunity.

Are you paying attention to these wake up calls, or are you hitting “snooze?”