Home / Sales and Marketing / Is GenZ the Most Creative Generation? They Say Yes.

Is GenZ the Most Creative Generation? They Say Yes.

Generation Zers (born between 1997 and 2012) claim that they are the most creative generation – more creative than previous generations.

What’s Next: Generation Antidentity, a new report by Complex Networks’ insights and research solution, Complex Collective, and PSFK, Generation Z is changing the labeling landscape. In other words, don’t define them using typical demographics because they won’t fit.

The report breaks down into four categories:

“Young consumers are resisting restrictive labels and instead moving more fluidly between different social groups and cultural affiliations. In addition to breaking down cultural stereotypes and gender binaries, they’re shattering boundaries when it comes to the things they consume. Embracing music and fashion that defies categorization, today’s youth refuse to follow tradition and rebel against it by embracing ambiguity and fluidity.”

Not only is this generation more diverse than any in the US before them, they have a strong sense of acceptance, unafraid to challenge boundaries. And, since they’re highly connected, “word of mouth works in record time, spreading trends unbound by the limits of regions or traditional media.”

52% of Gen Zers think it is natural for every individual to belong to different groups and have no problem with moving between groups, according to a 2018 McKinsey study.

“Young people expect to see themselves represented in the culture around them. They want the freedom to create and control their own identities, which means rejecting society’s labels in favor of choosing their own. Don’t expect your audience to fit seamlessly into a demographic or algorithm; instead, give them the freedom to create their own labels.”

78% of Gen Zers say that people should have the ability to define their own identities instead of having society apply labels to them.

76% strongly agree that their passions and interests are an important part of their identity.

83% say that their generation is more open-minded than previous generations.

“Brands and marketers should give this generation opportunities to interact and communicate IRL (in real time). Create inclusive communities around shared interests, in order to nurture devoted fans and give them the tools to communicate with each other – as well as your brand.”

81% agree that it’s important to be able to connect with other people who like the same things they’re into.

71% agree that social media is an important tool for self-expression.

Yet, paradoxically, Gen Zers feel like the most isolated generation, according to a survey conducted by insurance provider Cinga. In fact, 79% them said they felt alone.

According to Statista, social media could be to blame, which makes sense because this generation is so connected online. 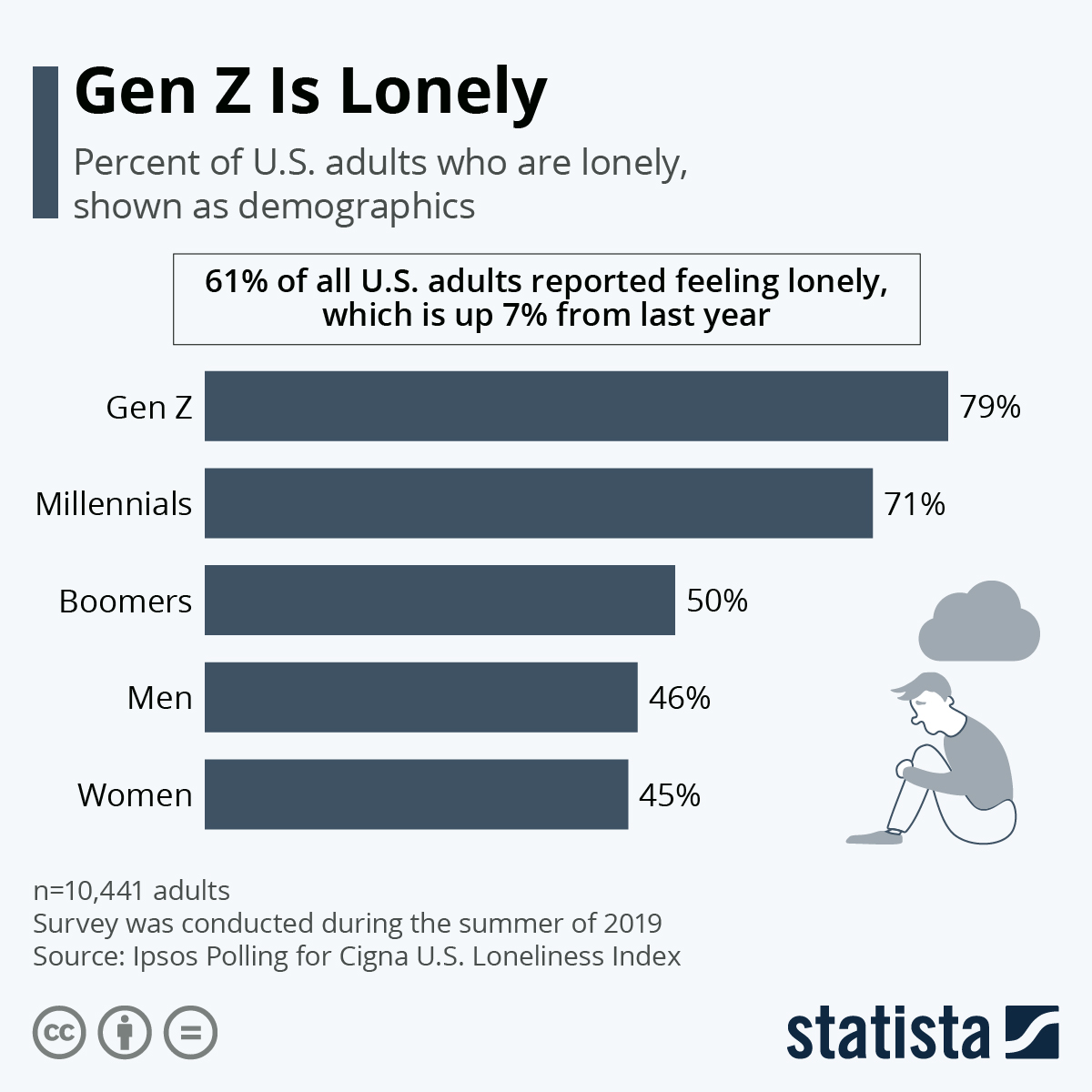 You will find more infographics at Statista

“Young consumers care more about individuality and think of themselves as undefinable; brands should focus on crafting products and services that feel as rare and one-of-a-kind as their customers are.”

Some Important Takeaways for Marketers

To create meaningful relationships with young people, embrace their flexibility and openness of spirit. Look for opportunities to remove unnecessary boundaries perpetuated by previous generations.

Don’t expect customers to fit seamlessly into categories like demographic or style; instead, give the audience the freedom to choose and create their own labels. Look for opportunities to empower talent to explore aspects of their creativity that they may not have had the time or resources to do previously.

Give your customers opportunities and tools to communicate with each other – as well as your brand. Ensure that branded spaces, whether online or off, feel inclusive and democratic.

Younger consumers are hard to fool when it comes to selling them on a so-called must-have product. Brands need to focus on delivering a level of meaning and value that speaks to their specific passions and needs. Embrace co-creation, giving customers the opportunity whenever possible to have a part in the development process.

It appears that Gen Z’ers are going to change the way we market. As this generation becomes more active as buyers and consumers, it will be interesting to see how their current needs evolve.