Home / Leadership / What Would Happen to the Business if You Die, Leave or Are Disabled?

What Would Happen to the Business if You Die, Leave or Are Disabled?

When we are young and early in our business lives, we feel infallible to the degree that we do not think of what might happen if we die while in office or decide to leave the company for any reason.

Such thoughts just do not occur to most of us until the business is substantially far enough along in its growth to have multiple layers of management and enough employees and stakeholders that there is a board of directors and calls for key man insurance and succession planning.

Three stories where young CEO’s I knew died in office

I personally observed relatively young CEOs die while in their prime and while in office. Three times.

One had a heart attack while exercising at home.

Another died of an infection immediately upon returning from his honeymoon.

And a third died on the operating table during a heart operation.

Looking for the succession plan

In each case, from five to hundreds of employees depended upon the continuation of the business and looked to the board of directors for immediate assurance that a plan was in place. And in these three cases, there was none.

The board of directors acts quickly and sometimes effectively

However, in each case there was a board of directors, and each board moved to protect the corporation quickly as people absorbed the shock of loss.  The outcomes were quite different with one board fending off immediate threats of lawsuit by creditors, another coaching a key employee into the CEO job, and the third electing a board member with experience to step in as CEO.

Not an easy conversation- succession planning 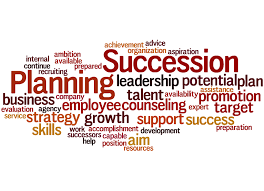 This is one sticky conversation for most young executives.  Have you thought of who might succeed you if you are incapacitated or worse?  Have you documented your position so a successor would know not only what you do but enough of how it is done to perform necessary functions early on?

It is rare when either is in place, yet experience has proved that none of us is infallible and planning for succession is a protection for those left behind.