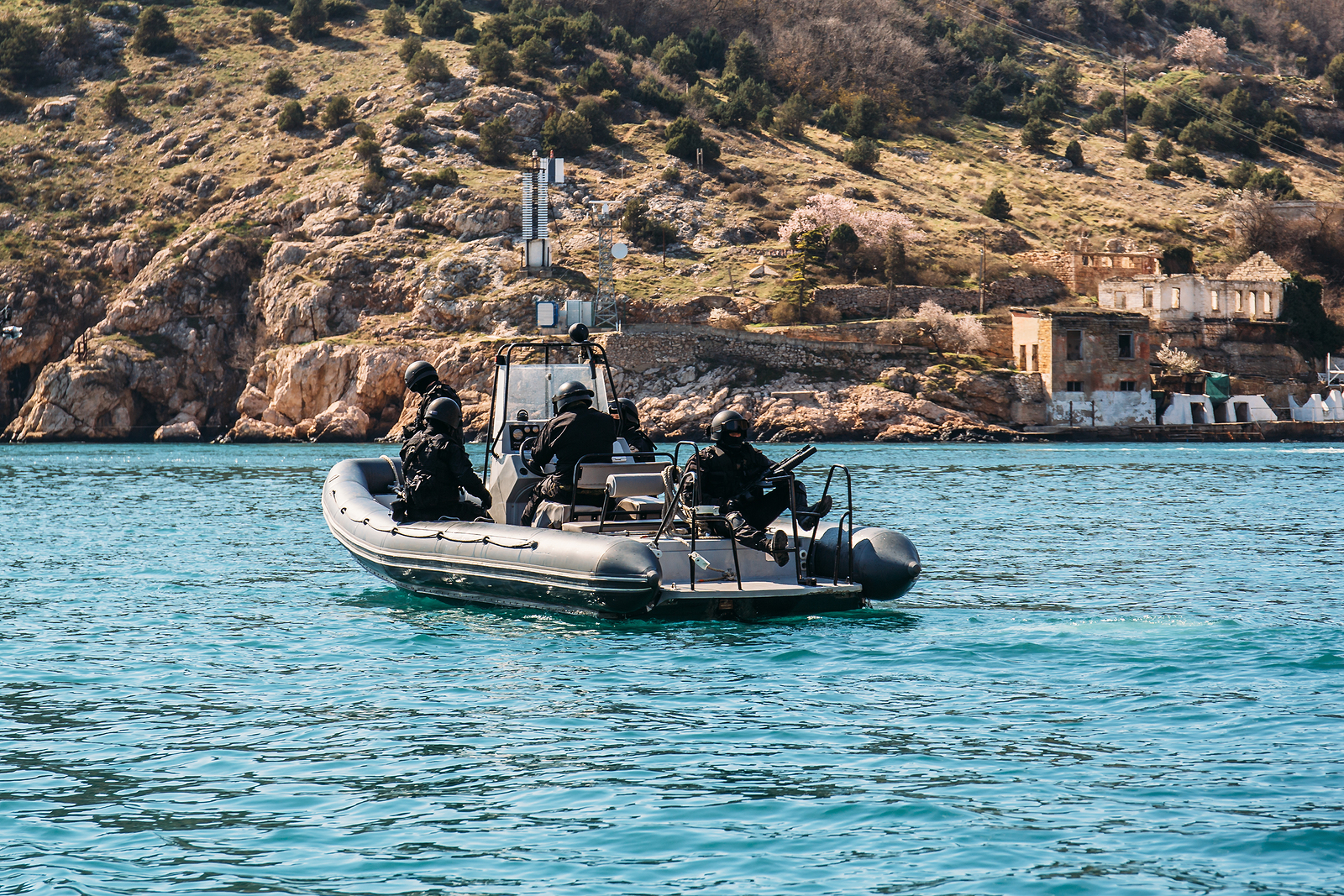 Can the strict rules applied in the army be useful in business and life? Jocko Willink and Leif Babin, who were commanders of navy SEAL special forces, askthis in their book Extreme Leadership. The Navy SEALs elite tactics prove that the answer is “yes.”

The Navy SEALs are elite U.S. military units that were created by President John F. Kennedy. They work in the sea, in the air and on land. They have fought every major American conflict since the Vietnam War. The Navy SEALs have recently gained worldwide notoriety following a special operation to track down and kill terrorist Osama bin Laden, the greatest enemy of the United States since the 9/11 attacks.

The book “Extreme Leadership” describes the experience that Jocko and Lief acquired as commanders during many missions.

They later founded a consulting company that now trains managers at all levels of leadership principles.

1. Responsibility above all else

According to Jocko and Leif, in any team the shared responsibility for success or failure rests with the leader. He cannot blame anyone and should be able to accept any mistakes, admit defeat and develop a plan that will lead to victory. The best leaders are not limited to the standard list of actions, they use extraordinary leadership – are responsible for everything that influences the success of the team.

If a team member doesn’t understand the command or instructions, the team leader can’t blame him. The role of a leader is to make sure everyone understands him. Similarly, if the manager does not understand the nature of the orders he has received for execution, he must take responsibility and ask his superiors for clarification.

For example, in business, if a customer decides to change supplier and turns to competitors, there is no point in saying that it is not our fault, that this is the law of the market, etc.

If someone in the team does not have the skills at the right level, the leader should become a mentor to him. If the situation does not improve, you need to be ready to make a difficult decision and fire the person for the common good of the team.

2. There are no bad teams, there are bad leaders

How the team works and what results it achieves depends primarily on the leader. You need to create well-functioning, efficient teams. When leaders use “extreme leadership,” they set high standards and consistently adhere to them.

One of the main features of the Navy SEALs is their skill in teamwork. Acting alone, it is difficult to survive in the extreme conditions of special operations. Therefore, a huge number of methods are used to stimulate teamwork during the training of candidates.

Jocko and Leif cite the experiment as an example in their book. One team led by an underdog leader took the last places in fitness tests, while the other (with a strong leader) won every test. When it was decided to change the leaders, the team, which had previously been considered the worst, began to win individual competitions. The change of leader turned everything upside down.

3. Faith is the first step

To inspire others to carry out a mission, the leader must truly believe in it. If a leader is not full of faith, he cannot inspire his people.

It’s hard to “sell” a plan to your team if you don’t believe in it yourself. The worst thing you can say is, “I didn’t make that decision, the order came from above.” If the leader does not understand the meaning of the upcoming mission, it is worth clarifying everything with the superiors before explaining something to his subordinates.

When a leader believes in the success of the upcoming assignment, it inspires a more attentive attitude to the work.

The ego overshadows everything and prevents planning, advice, and constructive criticism. Everything starts to fall into the abyss precisely when personal interests become more important than the good of the team.

Regardless of your experience, age and position, if you have a feeling that you already know everything, it’s time to come to terms with the fact that it is not. Contrary to popular belief, the leader does not lose credibility in the eyes of the team if he admits that he does not know everything. In fact, it can only strengthen leadership positions.

Inventing a bicycle anew is the enemy of productivity. The simpler the plan, instruction, or strategy, the more active we are to act. Conversely, the more complex the plan, the sooner the desire to act decreases. When plans become too complicated, people lose the urge to follow them. The instructions should be clear, simple, and concise. Everyone should understand their role and know what to do in the event of an unforeseen situation.

Whether it’s in business or in SWAT operations, there are times when people can feel depressed by a lot of problems and uncertainty. Instead of hesitation, it is worth taking a short break and identifying the most important tasks. Make a solution plan and act until it is resolved. Only then do you move on to the next call.

Pre-designed action plans for typical workflows can help prevent the occurrence of hurry-ups.

One of the main features of SEALs units is to work in enemy territory in complete secrecy and autonomy. Unlike conventional units, which are large and operate in daylight, the mission can be carried out by four to six people who are almost silently moving in the night darkness.

In the event of a collision with an enemy or complications during operations, it is sometimes difficult to communicate quickly and effectively with the command link to adapt the mission to new circumstances. Soldiers in an emergency must make their own decisions.

The decentralization of the command means that the mission and its limits have been formally determined by senior officers who have a review of the mission, but the details of the mission are left to those who are in contact with the real situation. These highly skilled people are aware of their responsibilities and have a clear idea of what is expected of them. They are empowered and able to make their own decisions.

This metaphor perfectly illustrates the need for decentralized management in the workplace. Even if many organizations can work with leaders who send their instructions, it is rare to find examples of companies that can allow their rank-and-file employees to make important tasks, but this is often the most effective way to get the results they need as soon as possible. Employees feel more motivated and interested when they can make decisions.

However, decentralized command does not mean that people can operate entirely on their own. It is necessary to define the boundaries in which everyone can bring something new to the work.

Planning begins with a task analysis. The leader must set clear goals for the team and announce the expected result to which to move. Obviously, not everything can be planned in advance, but the more precautions are taken, the more chances of success. The manager is responsible for planning as many scenarios and alternative plans as possible to adapt to a situation that can change at any time. “If X happens, we do Y, if this plan doesn’t work, then we go according to that plan, etc.”

Discipline and freedom are opposites that must be balanced. Good leadership requires finding that balance.

Jocko and Leif found that the stronger the team’s discipline, the easier it would be to respond to an unexpected situation. The more options you predict, the easier it will be to navigate the real situation. The more familiar and understandable the principles of combat interaction, procedures and instructions and tasks, the more people will be able to make their own decisions based on them. Turning to another area: musicians will say that the more they practice, the more they know their instrument and are free to improvise, regardless of the situation.

Discipline and commitment require incredible efforts at first, but these investments will free a person, and he will be ready to act when the need arises.

In the conditions faced by Jocko and Leif, the lack of discipline is unacceptable, given the possible consequences. Lack of discipline tends to progress and creates situations that can cost too much for a team.

Discipline – strict order, regime and control – may seem the opposite of freedom, that is, the ability to speak and think without restrictions. However, discipline is really the path to freedom.

What are the qualities of a good leader?

While no article can teach a leader how to properly manage a team, the advice of this text will help everyone become a more effective leader and achieve better results with their team.

Thomas Simon is a freelance writer and productivity expert, reviews new productivity/monitoring software programs and apps. He has extensive experience in writing about various topics including technology, gadgets, social media, and digital marketing. Thomas writes articles for Monitask, loves spending time with his cat and reading books on how to be more productive and efficient. He is currently living in Portland, Oregon. Follow him on LinkedIn.