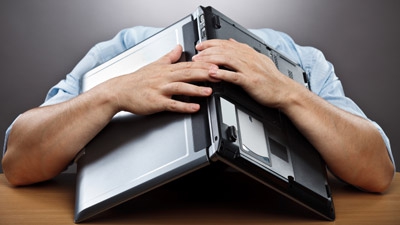 Ready for the Windows XP Funeral?

Back in February we took a little time to commemorate Clean Out Your Computer Day, but we should really take it a little further and make sure that our operating systems are tuned up, current and properly protected. Frankly, I don’t know if this is a sign of Microsoft’s success or failure, but Windows XP is still running on about 300 million computers including almost all of the world’s 2.2 million ATMs. In fact, almost 27 percent of all desktop computers are using XP and that’s far more than the combined 11.3 percent of desktops running either Windows 8 or 8.1. Windows 7 comes in just under 49 percent.
If you have XP machines humming away in your small business, you need to know that as of April 8, Microsoft will no longer support XP. That means no security fixes, software patches or technical support. The software giant has said it will continue to provide anti-malware support for somewhat longer.
The warning buzzer is going off
If you’re still clinging to XP, you probably haven’t switched to either Windows 7 or 8 because you’ve wanted to leave well enough alone, or you have hardware that won’t let you make the jump to one of the newer systems. If either of those scenarios are the case, you need to see the April 8 date as a major “Danger Will Robinson!” moment and come up with a plan.
You can upgrade hardware and move to a modern operating system or you can go the Linux route if you can’t bear the idea of scrapping your old PC. Disaster doesn’t strike at midnight on April 8, but it’s certainly inching closer. And while we’re on the topic of staying current with operating systems, the same principle applies to all of our computing gear, no matter who the manufacturer is. It’s an unfortunate fact of modern life that the gurus who design operating systems can only stay about a half step ahead of the hackers today.
Keep updates up-to-date
If your OS has a setting for automatic updates, take advantage of it. If you have to manually update your system and software, don’t fall behind. In a small business setting there can be dozens of PCs that need timely care and feeding. Be sure to have systems in place that make certain everyone is up-to-date.
Of course, an important part of this ongoing maintenance is to keep virus protection current. When the new viruses are added to the protection software, it means that they are currently active viruses. Those are the ones that you need to be especially fearful of. You don’t want to come in contact with this year’s flu virus and find yourself depending on last year’s flu shot for protection!
It is often said that eternal vigilance is the price of liberty. It’s also the price you pay to keep your computers up and running!
How about you? Do you have any XP machines still going strong? Are you going to tough it out until they die or migrate soon?
This article was originally published by Susan Solovic